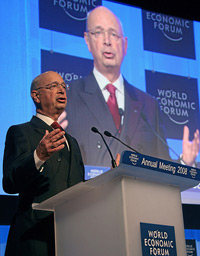 Sometimes in history, political and business leaders are pushed to make momentous decisions—decisions that mean real change, and have great impact.

Such decisions are never made lightly, but rather because the alternative is too dire to contemplate.

Today, we are at just such a crossroads, a moment of true societal crisis when dramatic change is inevitable. The only question is: will we help to usher in that change, or will we be its victims?

The theme of this year's World Economic Forum is Rethink, Redesign, Rebuild. For our own sake, and the sake of the future, we must do nothing less.

Last year's banking crisis shows that an economy built on speculation cannot last. But there is a larger context that is even more untenable.

For 400 years, the wealthiest countries in the world have increased their wealth at the expense of the poorest ones. Unfortunately, we have not done better in the last 50 years - the actors have merely changed.

And the pretense that free markets will help the poor has been shown, more and more clearly, to be a lie.

Today, it is clear that business as usual is now untenable not just for the poor, but for all of us. The number of conflicts worldwide has more than doubled since 1950. Climate change threatens our very survival. Our whole system is today at a tipping point, which leaves us only one choice – to change our ways, or face continued decline and misery.

Fortunately, because we are human, change is possible.

The attendees at this year's World Economic Forum hereby commit the power vested in us, as well as our collective wisdom, to taking, beginning this month, a few simple steps towards real, substantive change.

These measures are not rocket science. Nor will they take a hundred years to accomplish. These are simple, immediate steps that we can begin undertaking today.

And unlike the vague, hocus-pocus market-based (and verbiage-based) measures that have borne so little fruit, these measures will change things for real.

To read about these measures and what they will mean, please visit our initiatives page.

Too many developing countries have been forced to make false choices between privatization and poverty—and have received both.

From here on out, wealthy countries shall no longer use poorer nations as their larder and resource base, but will allow them to determine, guided solely by their own wisdom, to use their natural resources and arable land are best put to.

It is only by allowing developing countries to choose their own futures, and only by helping them humbly, generously, and without pressure to make those choices democratically, that we can right the wrongs of history and embark on a different path.

But we leaders cannot accomplish this alone. We are, obviously, faced with enormous pressures from those who helped to elect us. Only with the help of your pressure can we stand up to the interests which would have us continue business as usual at any cost.